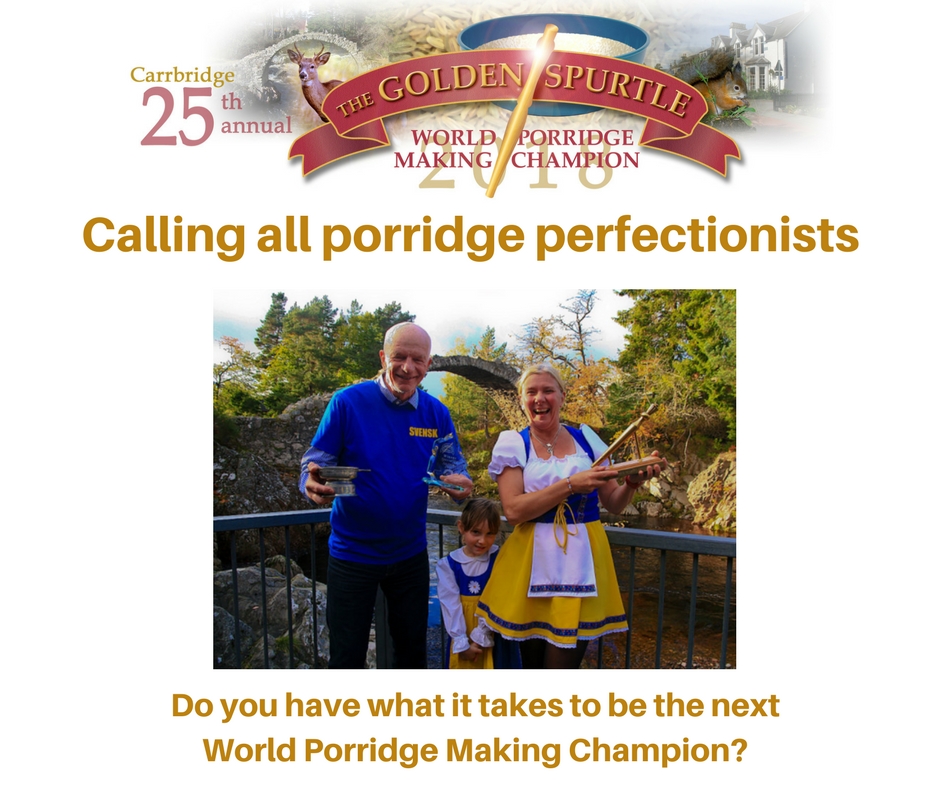 Do you, or someone you know, make the perfect porridge?

Entries for the 25th Annual World Porridge Making Championships open on Saturday 31 March, with the organisers anticipating a high level of interest from porridge aficionados from all over the world.

Hamlyns of Scotland are absolutely delighted to be the main sponsor.

The competition will take place in the highland village of Carrbridge on Saturday 6th October.

The World Porridge Making Championships is one of the most popular events in Scotland’s culinary calendar, with professional and amateur chefs, food producers, food bloggers, small business owners and home cooks from all over the world vying for the title.

The coveted title of World Porridge Making Champion, and the Golden Spurtle trophy, is awarded to the contestant deemed to have made the best traditional porridge using just three ingredients – oatmeal, water and salt.

The current champion is Ellinor Persson, a steel industry worker from Sweden, who runs foodie tours in the woods, fields and speciality restaurants around her local town of Halmstaad in South West Sweden in her spare time. Ellinor, who is planning to return to Carrbridge to defend her title, won the 2017 championships in an international field which also included competitors from the USA, Russia, Switzerland, Holland, Iceland and from across the UK and Ireland.

As well as the traditional porridge competition, there is also a speciality category for oatmeal combined with any other ingredients, leading to a wide variety of sweet and savoury entries. The current speciality winner is also a Swede, Per Carlsson, who impressed the judges with his dish of Nordic Porridge – Caramel Sweet and Sour, a porridge made with oatmeal, cloudberry liqueur, orange peel and whipped cream.

Organiser Michelle Green said: “It’s hugely exciting for the World Porridge Making Championships to be celebrating our 25th anniversary, and we have lots of special things planned alongside the competition including a food fayre, a commemorative recipe book, featuring some of the recipes from the last 25 years, and a cookery demonstration in the Village Hall the night before the event.

Hamlyns Managing Director Alan Meikle said: “Hamlyns of Scotland is absolutely delighted to continue our sponsorship of the World Porridge Making Championships, and we’re really looking forward to the enhanced programme which the organisers are planning for the 25th anniversary.”

Full details of the event and how to enter are available at goldenspurtle.com

If any of our followers are interested in entering, and are lucky enough to get a place, we’d be delighted to provide you with oatmeal, a lovely apron and a special spurtle to help you on your way!