The World Porridge Making Championships is one of the most popular events in Scotland’s culinary events calendar, and while the competition in the Highland village of Carrbridge isn’t able to go ahead this year, the spurtles will keep turning as the organisers prepare to announce the winners of the ‘Virtual Spurtle competition on World Porridge Day – 10 October.

Back in June, the competition organisers put out a call for video entries for this year’s online speciality porridge competition, with a plan to share the 10 best recipe videos on the Golden Spurtle website and Facebook page.

Competitors were asked to submit a video of themselves creating a sweet or savoury dish with oatmeal.

The organisers are delighted that the competition remains an international success, with entries received from porridge fans from Lithuania, Catalonia, Scotland, England, Canada and Germany.

Six judges marked the videos on five criteria including virtual taste (whether they wanted to taste the dish), appearance, execution, originality and flair.

Entries included a range of sweet and savoury recipes. Fruit-based porridges were by far the most popular, but other dishes included traditional oatmeal brose, an intriguing French dish using oats as a flour, and a coffee-based dish from Scotland, as well as an extremely complicated meal from Canada with seven different components.

The 10 winning videos will be shown on the hour, every hour from 9am to 6pm on Saturday 10 October. This date is particularly significant as it is also World Porridge Day, which celebrates the popularity of porridge and raises awareness and funds for Mary’s Meals who provide porridge to more than 1.5 million children in 18 countries every day at school.

From the 10 winning entries the judges will be announcing a winner and a runner up. There was a single point separating these two entries.

Charlie Miller from Carrbridge Community Council who organise the competition said: “The World Porridge Making Championships has been going since 1994 and we didn’t want to just let it go for 2020. We were delighted to attract entries from around the world for our ‘Virtual Spurtle’ competition, and we hope that we will be able to delight porridge fans from across the globe with the 10 winning videos and accompanying recipes which will feature on our website goldenspurtle.com, and on our Facebook page.

Hamlyns of Scotland, the Banffshire-based producers of Hamlyns Scottish Oatmeal and Porridge Oats, are continuing to sponsor the competition. Managing Director, Alan Meikle, said: “We were delighted with the virtual format that the organising committee came up with for 2020, and we’re really looking forward to watching the videos on 10th October, and hopefully getting some new ideas to try ourselves.” 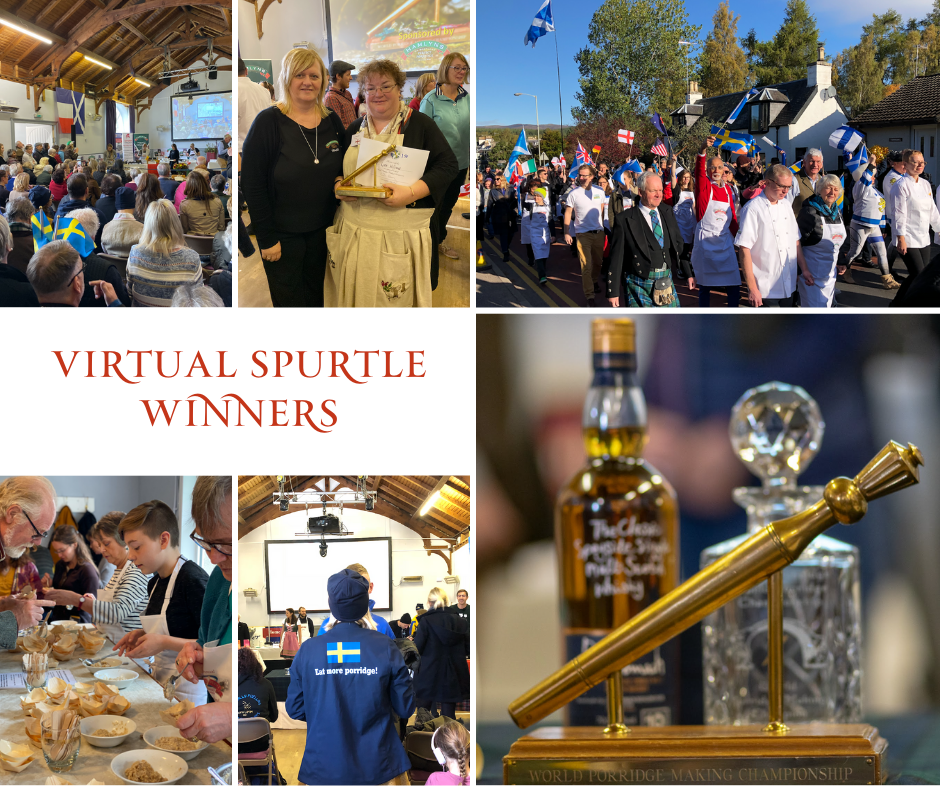