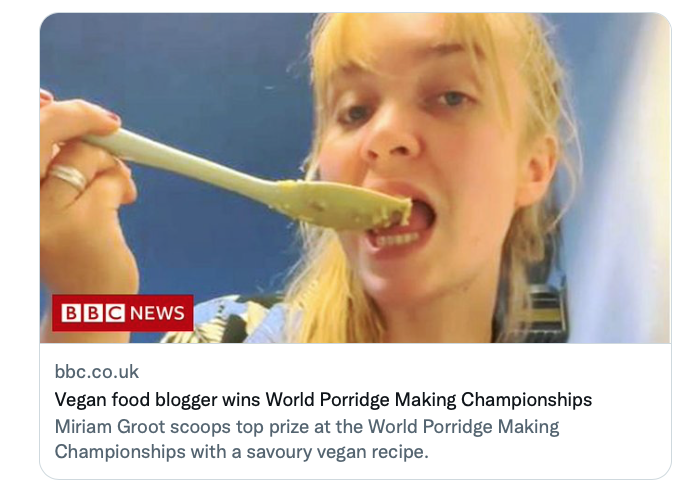 The virtual World Porridge Making Championships have been won by Miriam Groot, a 25-year-old food blogger and photographer from Eindhoven in the Netherlands whose Oatmeal Arancini made with pinhead oatmeal, mushrooms and vegan cheese was the unanimous winner.

Miriam runs a blog called The Veggie reporter, where she shares vegan recipes and writes about everything related to vegan and green living.

Miriam is so passionate about oats that she has even created an e-book about oatmeal.

Joint runners up were Coinneach MacLeod – better known as the Hebridean Baker – who was born and raised on the Isle of Lewis, and Aaron Leung, a video producer from New Jersey in the USA. 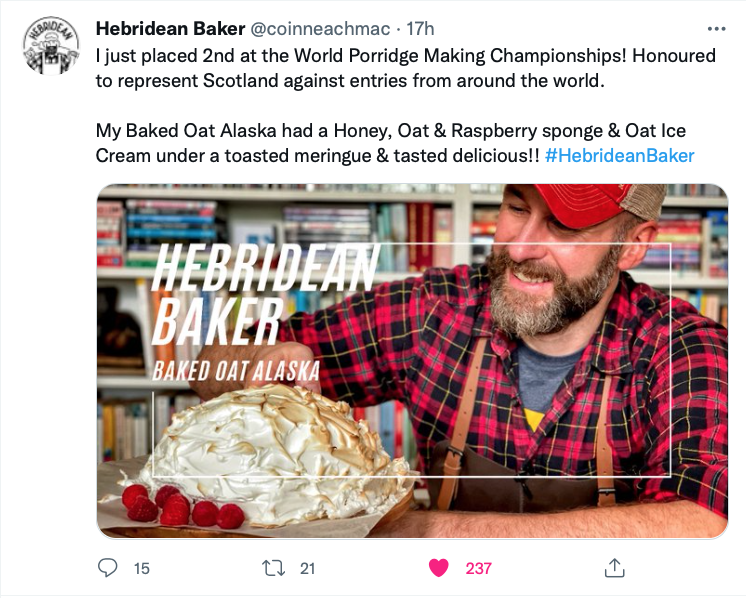 Coinneach’s Baked Oat Alaska was made with a honey, oat and raspberry sponge topped with a homemade pinhead oatmeal brittle ice cream and chocolate ice cream, all encased in meringue.

The winners were announced in a five-hour video reveal online on the Golden Spurtle Facebook page.

To enter the Virtual World Porridge Making Championships, competitors submitted a video of themselves making their favourite oaty dish.

The top ten included two Americans, one Canadian, two Australians, one each from Germany and the Netherlands, two from England and one from Scotland. Other dishes in the top 10 included a cranachan porridge, banana oat pancakes, an oatmeal banana split, and a desert porridge inspired by the Sacher Torte chocolate cake.

The organisers judged the entries on five criteria – appearance, execution, originality, flair and virtual taste, reflecting which dishes the judging panel most wanted to try.

Charlie Miller from Carrbridge Community Council who organise the competition said: “While we were disappointed that we couldn’t have the competition in person again this year, the response was amazing, with the highest level of international interest we’ve ever had. The judging was very close, with only six points separating the top ten. Congratulations to our top ten, and especially to Miriam, Aaron and Coinneach for your excellent entries. We hope to see you all in Carrbridge this time next year.”

Each of the top 10 receives a Perfect Porridge Pack from Hamlyns of Scotland, together with a hand-carved commemorative spurtle from the organisers.

Alan Meikle, Managing Director of Hamlyns of Scotland said: “Once again, the virtual World Porridge Making Championships have been a great success, and we’ve hugely enjoyed the online video reveal. We’ve seen some brilliant ways with oatmeal, and we look forward to trying out some of the recipes for ourselves.”

The winning recipes will be available on the Golden Spurtle website goldenspurtle.com