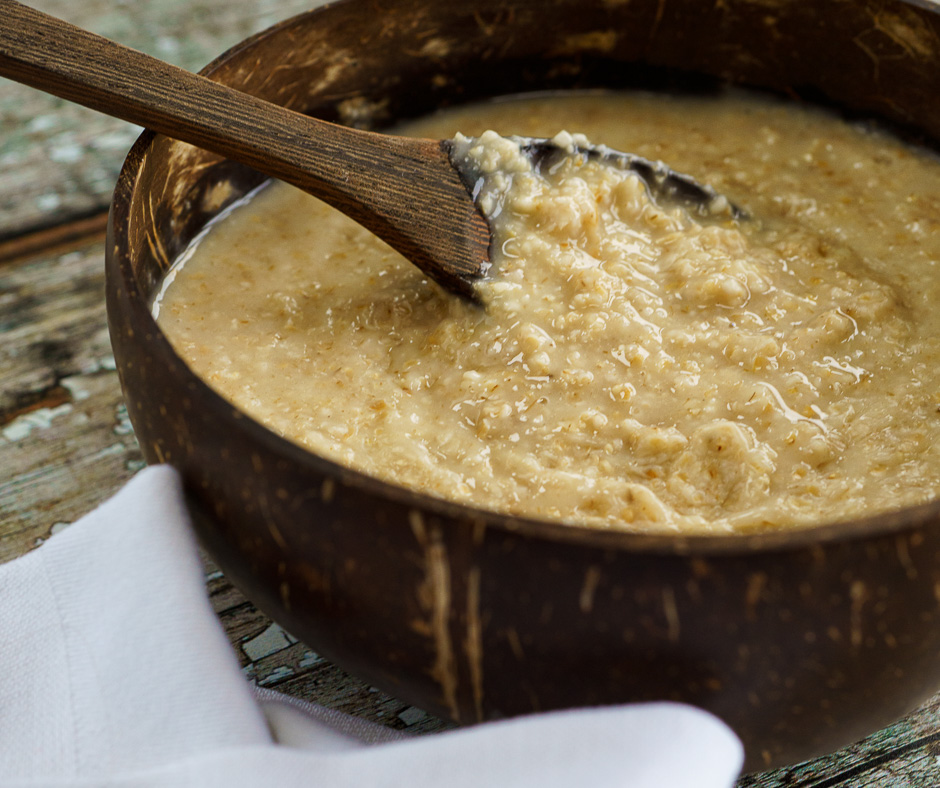 Today is World Porridge Day – an annual fundraising and awareness day for the charity Mary’s Meals who feed steaming mugs of porridge to more than two million children in 19 countries around the world every day.

So it seems like the perfect day to share a recipe for one of the oldest, simplest Scottish recipes – traditional Brose, an ancient Scottish porridge, which David McCarlie shared with us.

Brose means Broth – and Brose is essentially a broth made from oatmeal. You make it in a mug or a bowl – no cooker or microwave required!

“I first heard of Brose in the mid seventies when I lived in a bothy on an estate with five other teenagers,” explains David. “One of the old farm hands told us about Brose and how in centuries gone by, farm workers would often make it from oatmeal which they received as part of their wages.”

“The oatmeal came in large sacks and was poured into a large wooden kist for safe-keeping. The kist helped to stop the mice from scoffing the oatmeal.”

“The farm hand told us about his time as a prisoner of war when he was captured at Dunkirk and spent the war years working on a German farm. The farmer was intrigued at how he took the horse’s food and made a porridge with it, a meal that sustained him when working on a farm was very labour intensive.”

David says that discovering Brose was a life changer. “We started to make Brose because it was so easy and quick to make, and kept us warm and full for hours. Of course it was cheap too so we could save some money for the pub on a Friday night!”

“We spent many tough winter mornings topping and tailing turnips in the fields before heading back to the bothy for lunch. We only had one cooker with just three rings so six of us battling to make lunch was not easy. However, all we required was a huge kettle and within ten minutes, we were stuffing ourselves with a hot, nourishing meal in double quick time.

“Our Brose was a lifechanger for us. Sure, it was boring, compared with tinned soup or mince and tatties but we didn’t care. We were warm, appetite sated, ready for a cold foray up and down the dreels of turnips again. I still have three scars on my hand from cutting myself doing that work.”

“Farm workers were always seen as poorly paid but that wasn’t very accurate. The perks were quite valuable with free accomodation, oats, potatoes, firewood, milk, chickens and even a tweed suit of clothes.”

“At the shooting season we given the occasional brace of grouse, pheasant and partridge. Rabbits were also freely eaten and Skirlie went well with roasted rabbit too. And we had the Scottish Agricultural Wages Board setting wage rates which were widely adopted by the farmers. I left the country life some thirty years ago but look back on it with great fondness.”

David has remained a life-long fan of Brose.

“To this day, I still have a bowl of Brose once or twice a day. It’s just oozing goodness and nourishment and you can be very creative with it. I like the occasional scoop of Mackies Traditional ice cream and sliced peaches with mine for supper some evenings.”

“My son was brought up with Brose for breakfast, which was much better than the heavily-processed sugar-laden cereals aimed at children, and he never complained about it. He liked doing the stirring and adding some home made strawberry jam to his, and I remember when he took an antique wooden brose bowl and a spurtle to his ‘show and tell’ at school, which was quite interesting and amusing.”

Years later he feeds his young son the same for breakfast, and I’m delighted to say that the family enthusiasm for Brose continues.”

Pour five heaped tablespoons of oatmeal into a bowl. David uses Pinhead Oatmeal but we used Hamlyns Scottish Oatmeal for a smoother Brose

Add a pinch of salt

Add a knob of butter (optional)

Gradually pour and stir in freshly boiled water and keep adding water and stir until you have the consistency you prefer. The oatmeal will swell slightly, but not as much as if you are simmering them is you are making porridge. If it’s too watery, add more oatmeal, if it’s too thick, add more water until it’s just the right consistency you enjoy.

Let it cool slowly until the Brose is just the right temperature to enjoy.

Traditionally Brose was eaten with a cup of milk, dipping the spoonful of Brose into the milk.

Try adding your favourite fruits and usual porridge toppings to your Brose. Try a spoonful of your favourite jam, or sliced banana, a generous dash of honey, fresh yoghurt, sultanas or a scoop of ice cream.

David recommends a combination of honey, banana and Greek yoghurt.

“Our old farm hand used to laugh at us for breaking tradition and turning Brose into a pudding, as he put it. But the reality is, far from being boring, Brose can be quite imaginative and very tasty with minimal time spent making it.”